This snippet (which isn't really a snippet) presents a narrow set of performance comparisons for retrieving documents from MongoDB using MongoFrames vs. MongoEngine.

Before you review the results there are a few things you should consider:

We consider MongoFrames' Frame and SubFrame classes to be approximately equivalent to MongoEngine's Document and EmbeddedDocument classes for the purpose of the test.

The tests were run against two collections, Company and Employee, of which Company includes a list of embedded documents (Department). We generated the following amounts of data for the tests:

There's no particular rhyme or reason for these quantities I just picked them as a starting point.

Each test was run 100 times and the best, worst and average time to execute the test was recorded.

The tests were executed on an Intel NUC5CPYH 2.16GHz with an SSD drive, tests were performed using Python 3.4 and MongoDB 3.0.12.

* For all graphs and tables smaller is better.

1. No reference or embedded documents 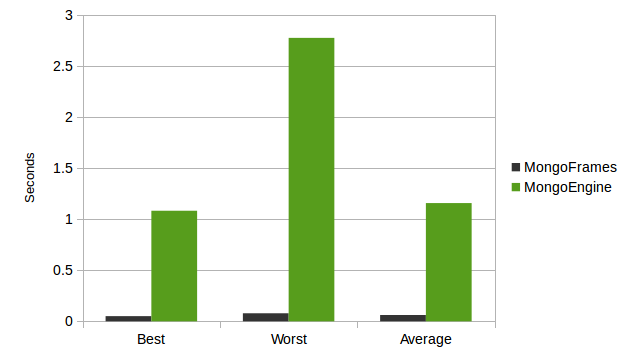 We selected all 5,000 employees without dereferencing.

* MongoFrames on average was 18.7 times faster.

2. With embedded documents but no reference 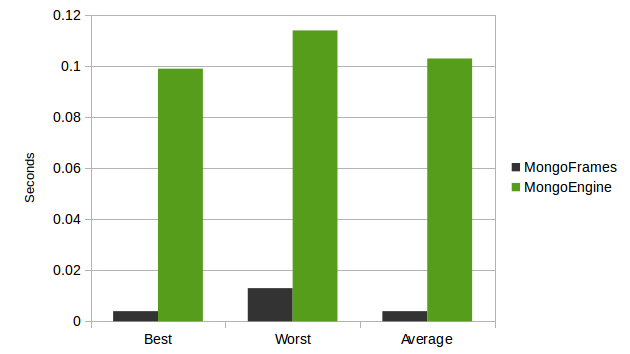 We selected all 100 companies each having 10 departments associated with them as embedded documents.

* MongoFrames on average was 25.75 times faster.

3. With a reference and embedded documents 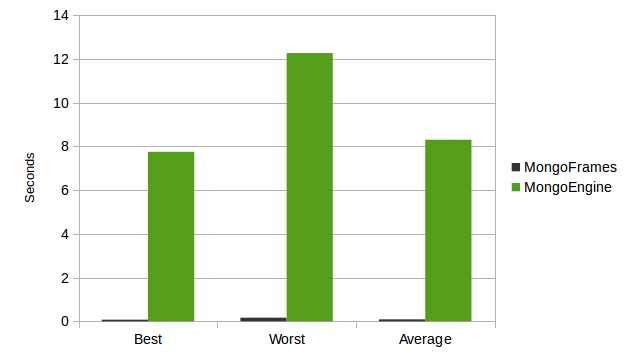 We selected all 5,000 employees including each employee's referenced company document and the 10 department embedded documents for each company.

* MongoFrames on average was 92.24 times faster.

The results highlight that MongoEngine has a number of performance bottlenecks. First-hand experience of these enabled me to identify MongoEngine's heavy initialization code and dereferencing on-request (e.g when an attribute containing a reference is accessed) as the primary culprits.

Even with moderate traffic we would run up against these bottlenecks with MongoEngine, and as the results support, each reference or embedded document we added to a model exponentially increased the retrieval time.

MongoFrames keeps initialization code to a minimum (just one assignment by default), and takes an upfront rather than on-request approach to dereferencing documents (if you're interested in the details checkout the Performance section in the Frames and SubFrames API page).

The result is faster document retrieval and a linear increase in retrieval time as models get more complex.

On the flip side

If you're thinking about what ORM/ODM to use for your next project and this snippet has given you pause for thought that's great, but in weighing up your options you should take the following into consideration: